The Denali name is nearly synonymous with the GMC Yukon as the luxurious trim was introduced in 1999 and now accounts for approximately 60% of Yukon sales.

While the Denali returns for 2021, we recently spent some time with the all-new Yukon AT4. Billed as a premium off-roader, the model follows in the footsteps of the popular Sierra AT4 and is the latest member of the AT4 sub-brand.

The rugged design is immediately apparent as the Yukon AT4 features a unique front bumper with a gloss black insert and a prominent skid plate. This isn’t just for looks as it gives the model an approach angle of nearly 32 degrees when the air suspension is put into its highest setting.

Those aren’t the only special touches as the AT4 has a dark chrome grille and red recovery hooks. Designers also added underbody protection and two-tone 20-inch wheels wrapped in meaty all-terrain tires. The model also eschews chrome window surrounds, while dark chrome accents can be found on the rear bumper and liftgate.

Besides the special styling cues, the Yukon AT4 comes equipped with IntelliBeam LED headlights, acoustic laminated glass and a hands-free power liftgate which projects the GMC logo onto the ground. The model also has black side steps, but our tester was outfitted with power-retractable side steps which are included in the AT4 Premium Plus Package. The package also includes a panoramic glass sunroof, an adaptive air ride suspension, an electronic limited slip differential as well as the Max Trailering and Rear Media / Nav Packages.

A Well-Equipped And Spacious Interior 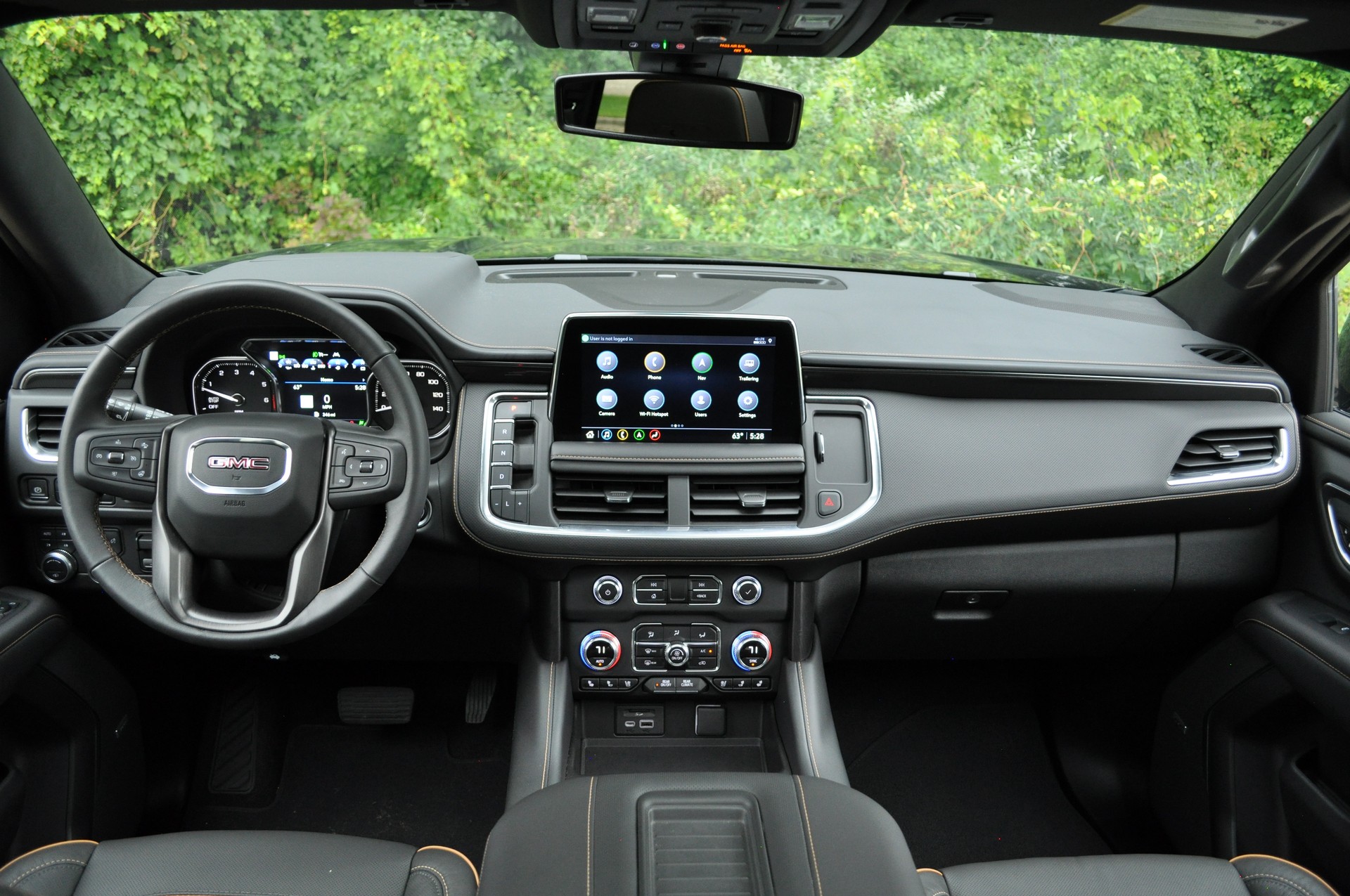 The big interior news is the Denali’s exclusive cabin, which features a unique dashboard and authentic wood trim. However, the AT4 has some special touches of its own.

The most noticeable are Jet Black perforated leather seats with exclusive Brandy accents. There’s also contrast stitching, AT4-branded headrests and dark brushed aluminum trim. Rounding out the highlights are AT4 sill plates and a couple of off-road focused displays.

Given that the AT4 slots beneath the Denali, it shouldn’t be surprising to learn the SUV comes loaded with luxury features.  Among them are heated / ventilated front seats, heated second-row captain’s chairs and an automatic heated steering wheel. Buyers will also find an 8-inch driver information center, a 9-speaker Bose audio system and a 10.2-inch infotainment system with wireless Android Auto and Apple CarPlay. Other niceties include a wireless smartphone charger, power-folding third-row seats, a power tilt / telescoping steering column and a passive entry system with a push-button ignition. 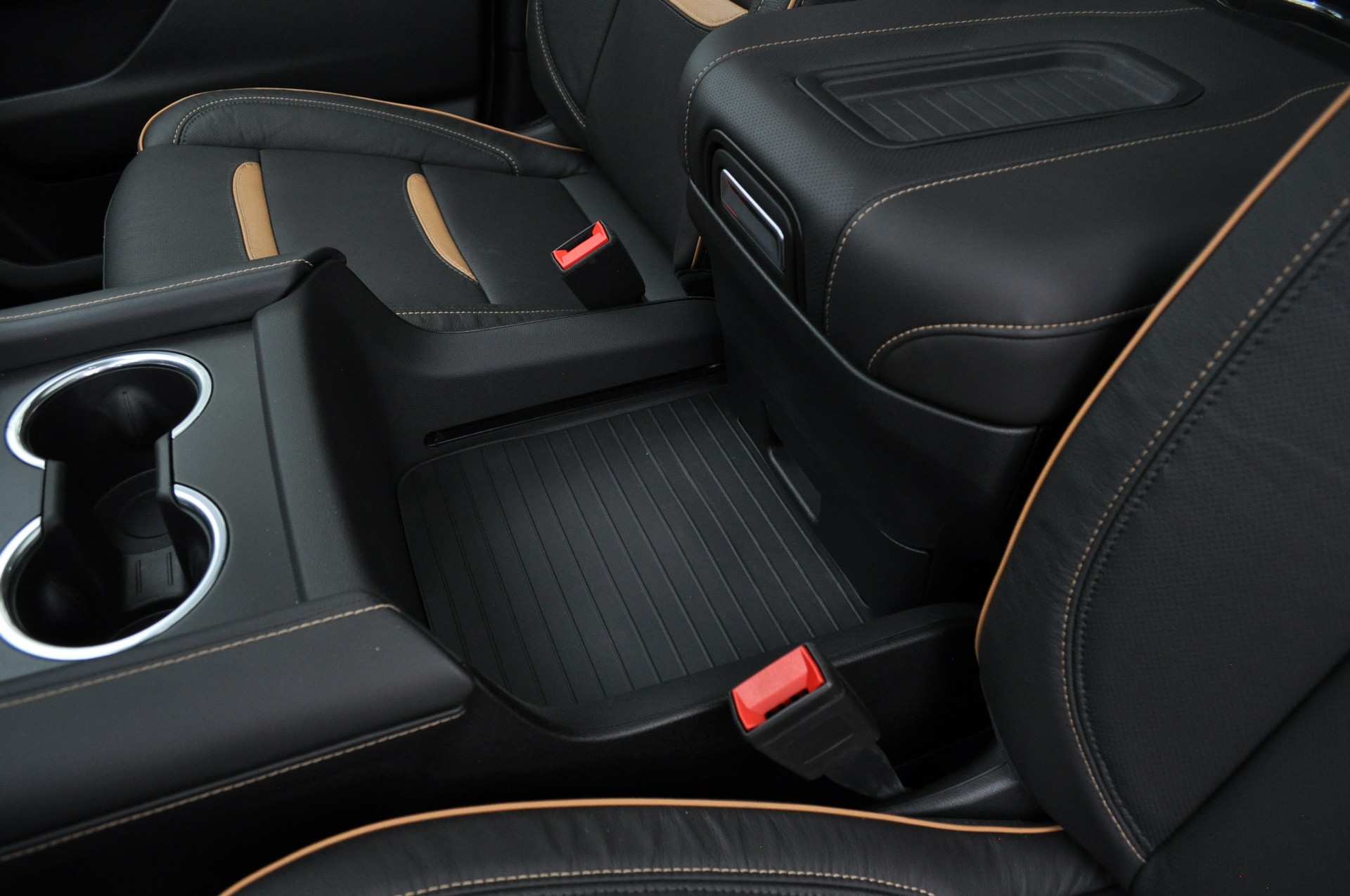 Besides the impressive collection of standard equipment, our tester was outfitted with the optional power sliding center console which costs $350. GM is pretty excited about the feature which enables the center console to slide back 10 inches (254 mm) to provide a storage space between the front seats. It’s geared towards women as the opening makes a perfect spot to store a purse, while still keeping it within easy reach.

Besides the handy storage space, the power sliding center console has a hidden drawer and makes the second-row cup holders easier to reach. While the front armrest effectively disappears when the console is slid back, the top section slides forward to give you a little bit of support.

The console is an interesting feature and it’s reasonably priced, which is a pleasant surprise. The only downside is the switch is placed on the ceiling, where it’s easy to overlook. 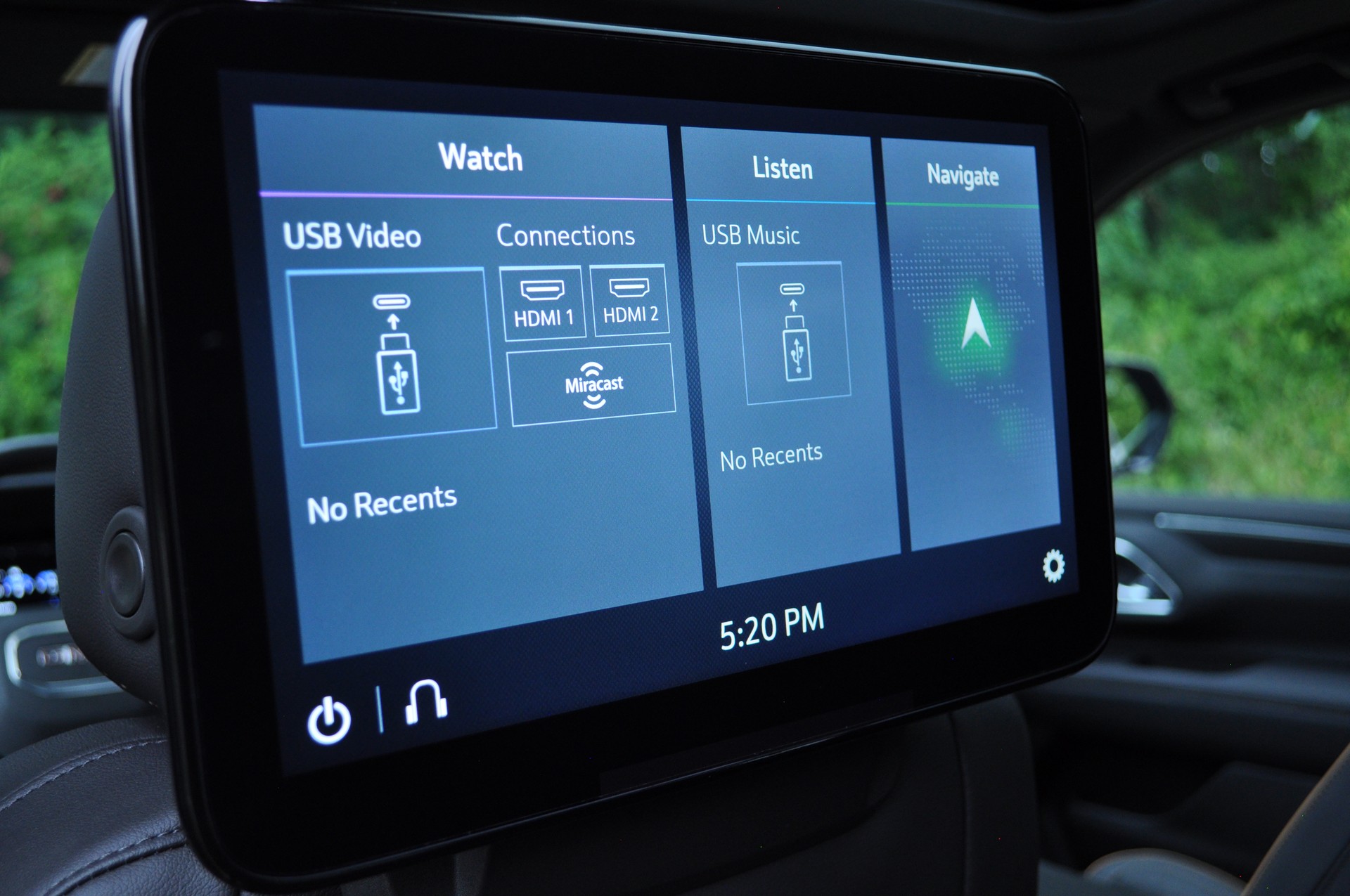 Another notable option is the rear seat entertainment system which features two 12.6-inch displays. They’re included in the $2,490 Rear Media and Nav package, but there’s no built-in DVD player. That seems like an odd omission, but people can hook up streaming media players such as those from Apple, Amazon and Roku. To aid in this, there are HDMI ports and a 120 volt outlet on the rear of the center console.

Besides compatibility with streaming devices and gaming systems, the rear seat entertainment system is designed with backseat drivers in mind. It allows second-row passengers to see where the vehicle is and send navigation directions to infotainment system. 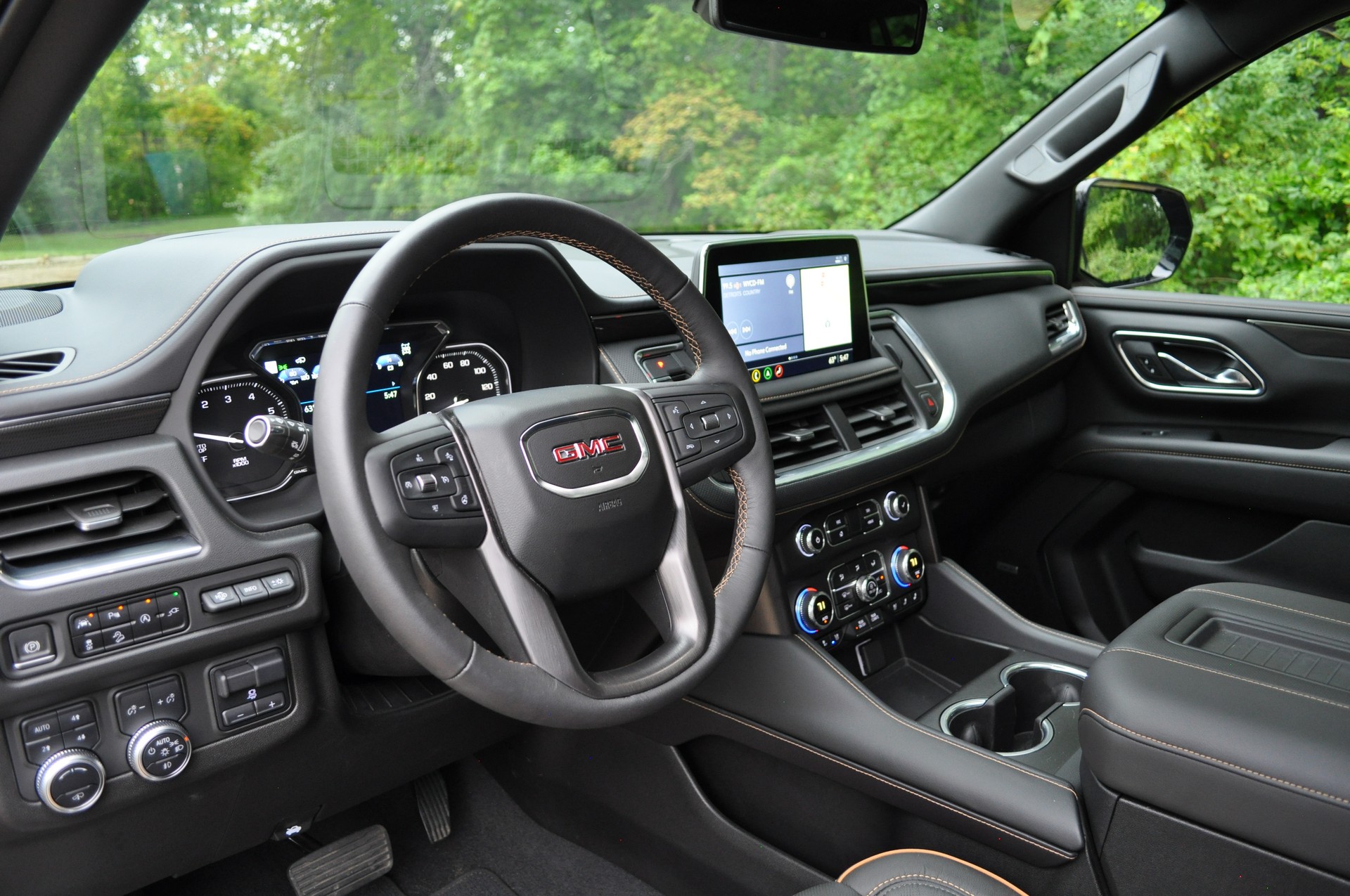 Despite this, there’s one feature you won’t find on the Yukon AT4 – adaptive cruise control. That’s unfortunate and it means customers are stuck with a ‘dumb’ cruise control system which feels like something from a bygone era.

That being said, adaptive control is available on the range-topping Yukon Denali. However, it requires customers to shell out $1,780 for the Advanced Technology Package which also includes a rear camera mirror, enhanced automatic emergency braking and the Advanced Security Package.

While it’s sad that adaptive cruise control isn’t even an option on lesser trims, all Yukons have a truly spacious interior. Thanks to the extra length and the independent rear suspension, there’s 34.9 inches (886 mm) of third-row legroom. That’s a massive increase of 10.1 inches (257 mm) and it means the rear seats can comfortably accommodate adults including this 6’ 2” reviewer. 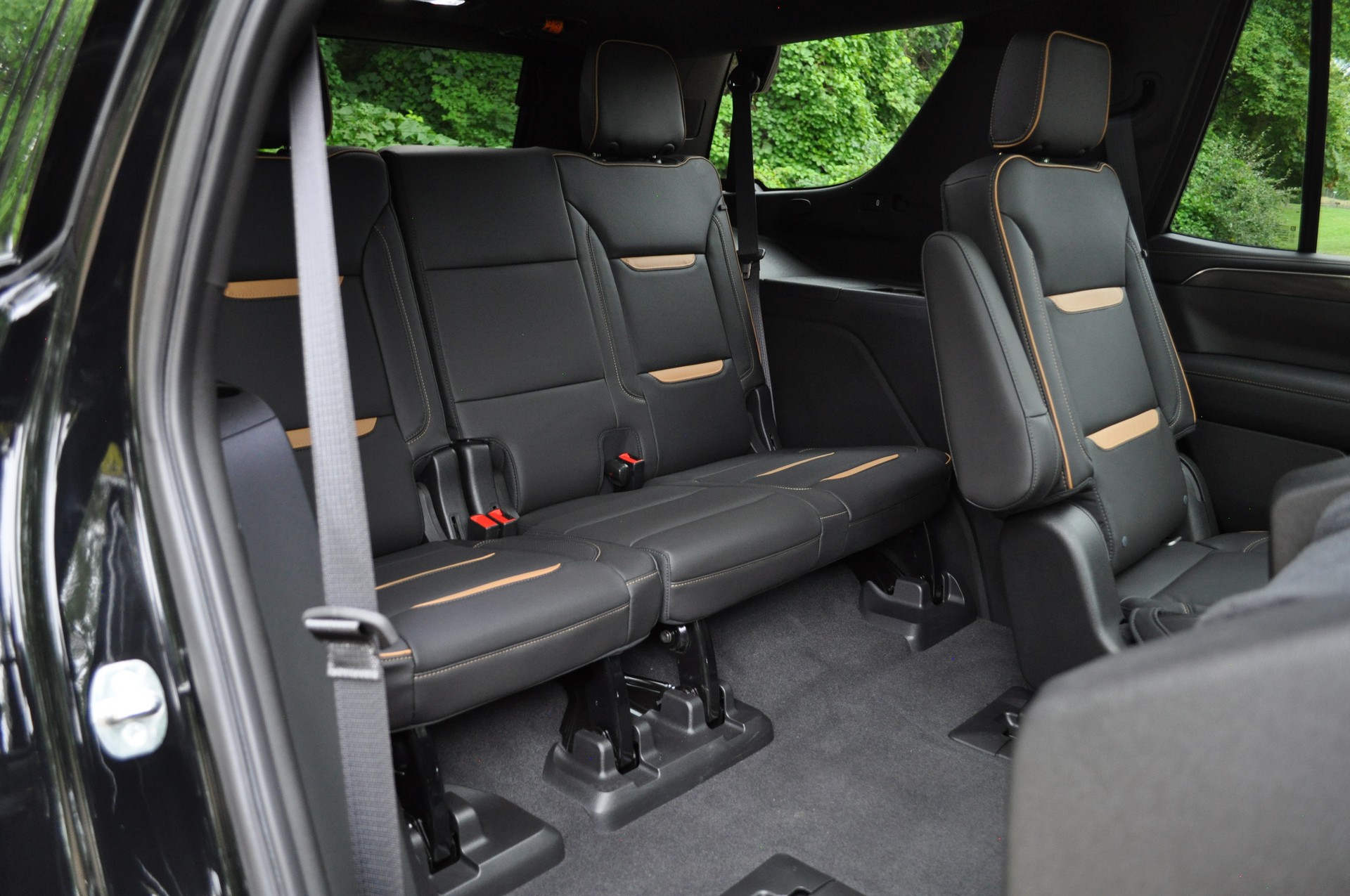 If you’re using the model for people hauling duties, you’ll probably want to upgrade to the Yukon XL. It has 36.7 inches (932 mm) of third-row legroom and that’s 2.2 inches (56 mm) more than last year’s model. 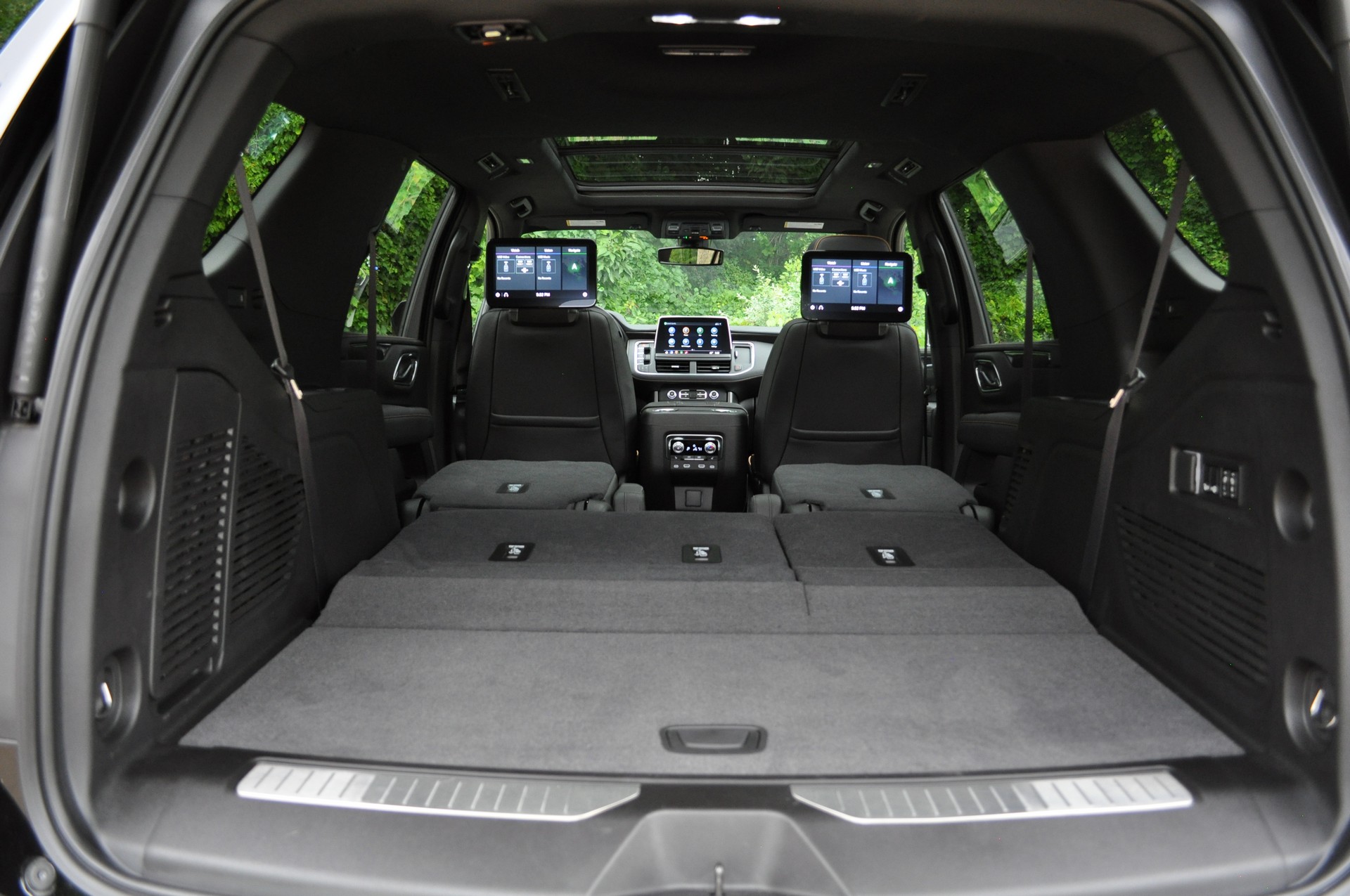 Given all of this, it shouldn’t be surprising to learn the Yukon has a comfortable and spacious interior with numerous luxury features. It’s easy to get comfortable behind the wheel and drivers are surrounded by wrapped surfaces, metal accents and mostly high quality plastics.

There are a few questionable design decisions, but most controls are logically placed. The cabin is also quiet and features an infotainment system which is fast and responsive.

Three Engines And A Ten-Speed Gearbox 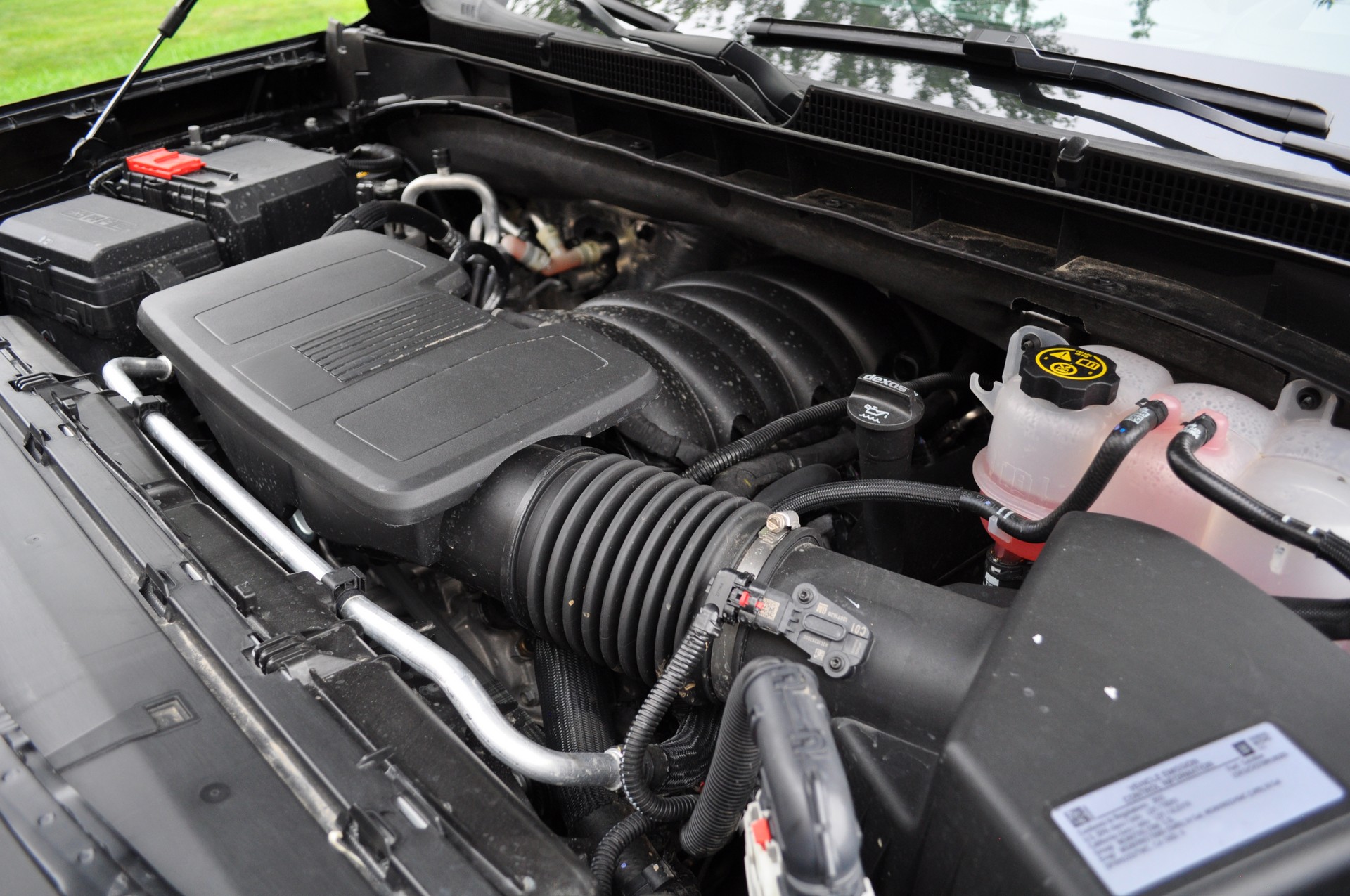 If power is what you want, you’ll need to upgrade to the Yukon Denali which has a 6.2-liter V8 with 420 hp (313 kW / 426 PS) and 460 lb-ft (624 Nm) of torque. The engine is also found in the Chevrolet Tahoe High Country we drove earlier and it provides brisk acceleration as well as a more responsive feel. 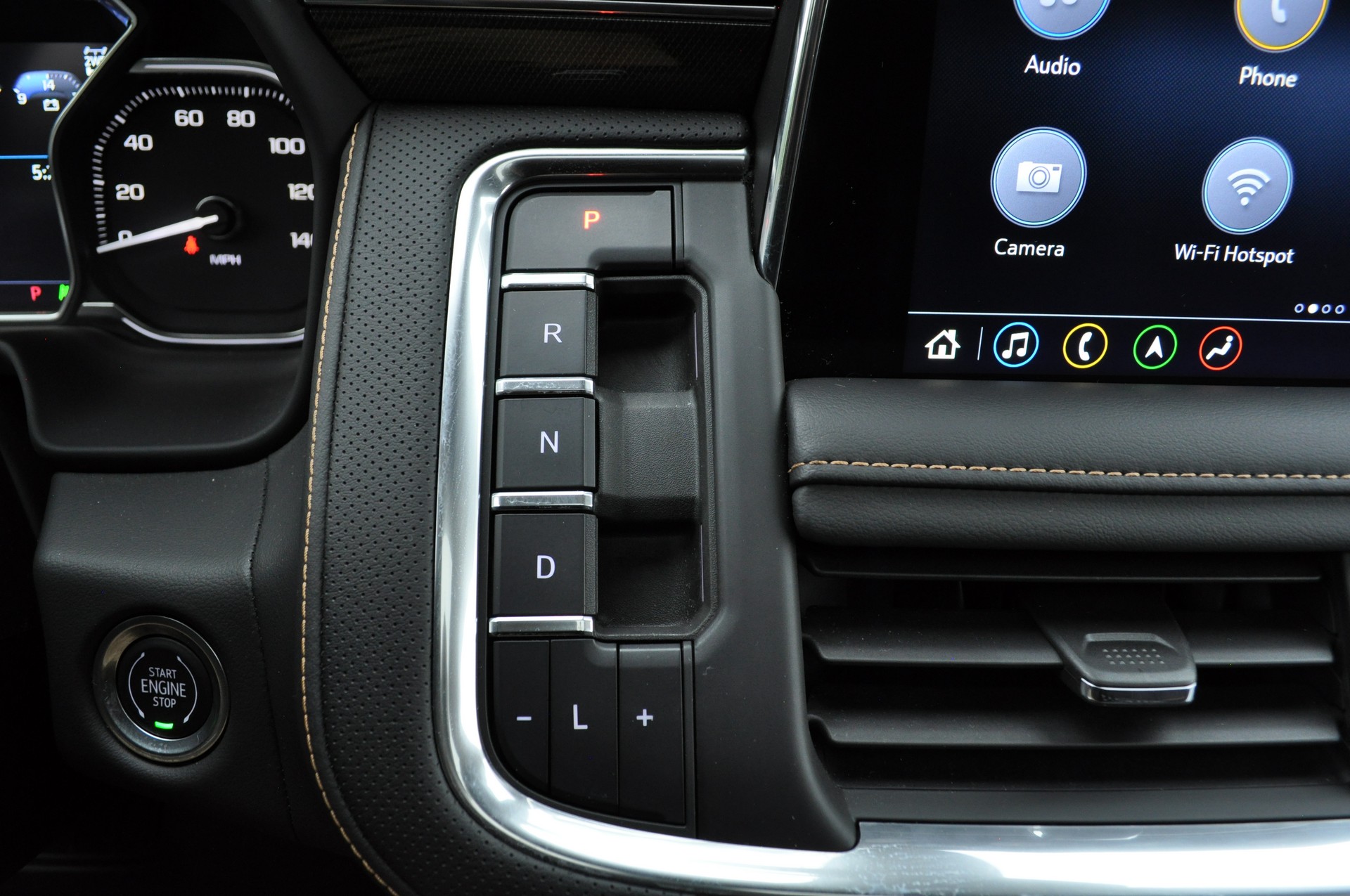 Regardless of which engine is selected, all are paired to a ten-speed automatic transmission which is controlled by a new shifter that is mounted on the dashboard. It replaces the old-school column shifter and helps to make the Yukon feel less truck-like.

Speaking of the gearbox, it operates unobtrusively in most situations.  However, putting the model into sport mode seems to sharpen up its response.  There’s also a normal mode as well as off-road and tow/haul settings.

Sticking with the latter, the Yukon and Yukon XL can tow up to 8,400 lbs (3,810 kg) when equipped with the Max Trailering package. It includes an upgraded radiator, a trailer brake controller, trailer side blind zone alert, hitch guidance with hitch view, and an in-vehicle trailering app. 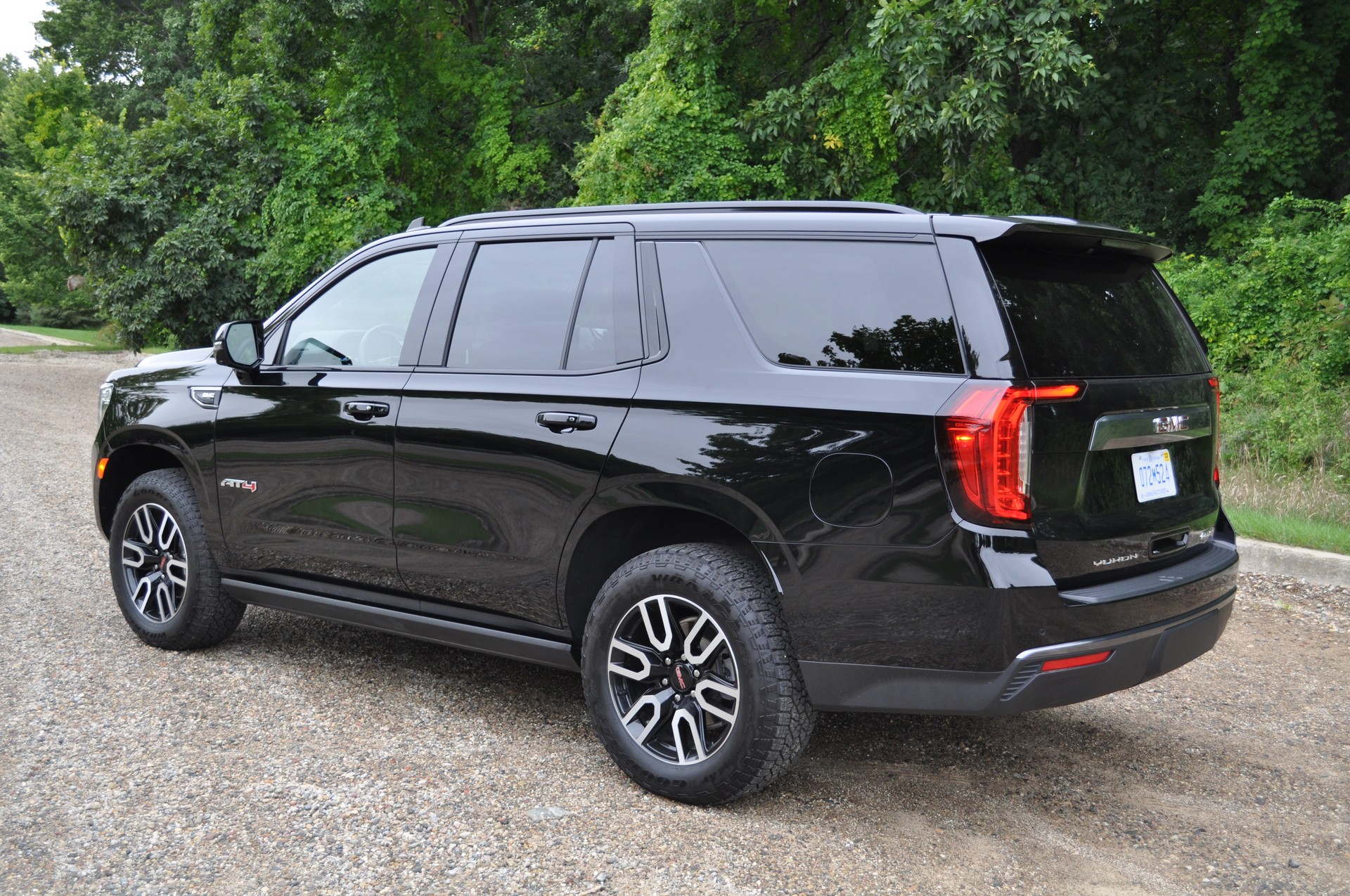 While both V8 engines feature stop/start technology and a cylinder deactivation system, the Yukon and Yukon XL aren’t exactly eco-friendly. Models with the 5.3-liter V8 get 15-16 mpg city, 19-20 mpg highway and 17-18 mpg combined.

Upgrading to the 6.2-liter V8 causes the numbers to drop to 14-15 mpg city, 19-20 mpg highway and 16-17 mpg combined. Those figures are less than the Expedition and Expedition Max, but the diesel-powered model promises to be one of the most fuel-efficient SUVs in the segment.

A Comfortable And Capable Cruiser

The 2021 Yukon ushers in a new independent rear suspension which replaces the previous live axle setup. Besides allowing for better interior packaging, the suspension improves ride quality, comfort and handling.

As part of this effort, the suspension has three laterals links with stiff bushings and ball joints for “improved handling and steering response.” They’re joined by a trailing arm with a soft bushing which benefits ride comfort.

The advantages of the independent rear suspension are obvious and can be further enhanced with an air ride adaptive suspension that is available on the AT4 and Denali. Designed to offer “cloud-like ride comfort,” the air suspension improves ride quality and features an automatic self-leveling function. 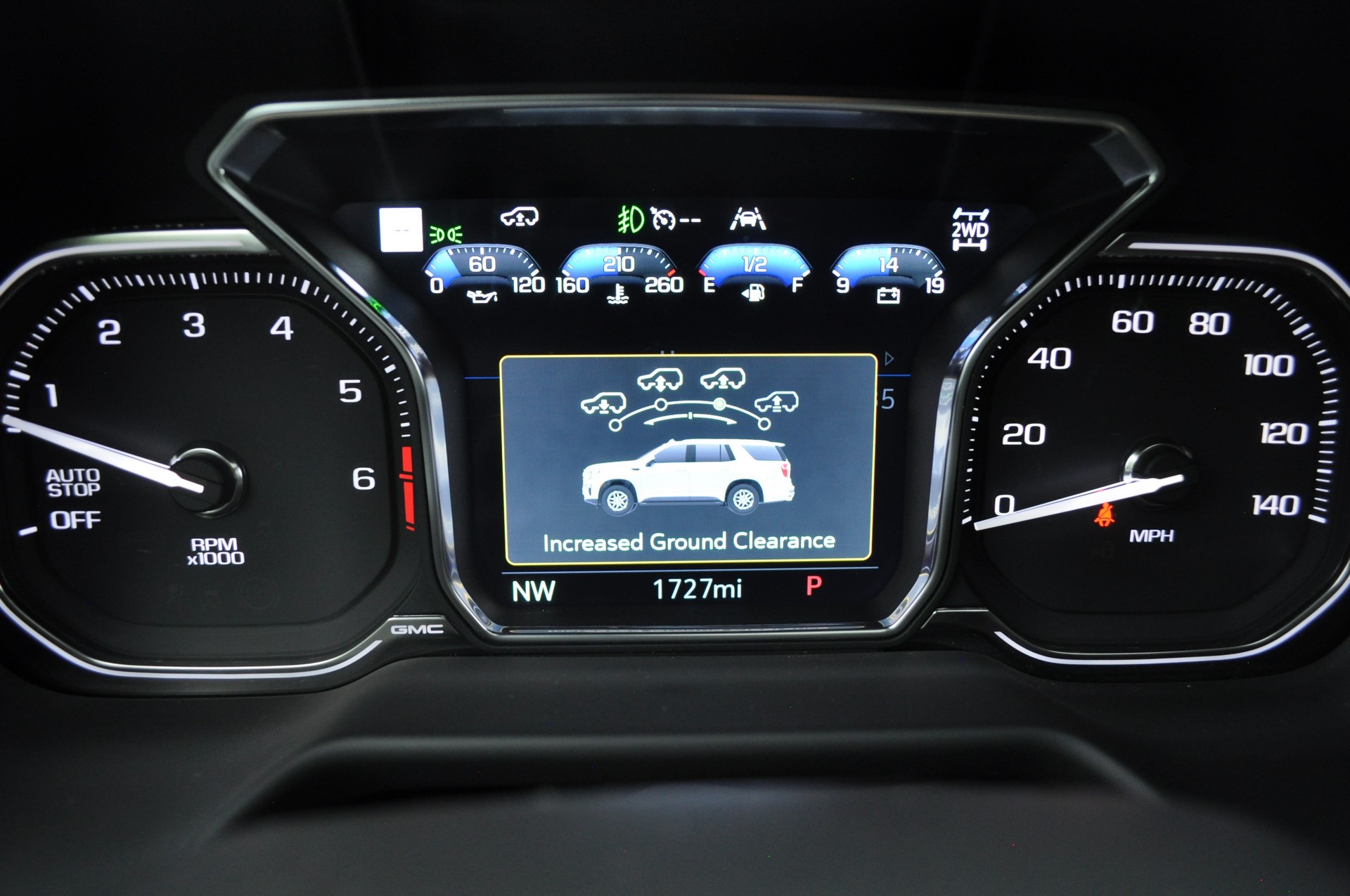 The air suspension also improves capability as it provides additional ground clearance. With a simple twist of a knob, you can increase the ride height by 1 inch (25 mm). For more extreme off-roading in 4-LO, the suspension can be raised an extra inch (25 mm) to ride 2 inches (50 mm) higher than normal.

If that wasn’t impressive enough, the Yukon can be equipped with a fourth-generation magnetic ride control system. Standard on the AT4 and Denali, the system enables improves body control and handling as sensors continually monitor the road and adjust damping to “reduce bouncing, body roll and vibrations.”

The latest version of the system features new sensors and adjusts almost instantly. That’s not hyperbole either as the system adjusts for every inch of road travelled at speeds of 60 mph (96 km/h).

Thanks to the new suspension and magnetic ride control technology, the Yukon feels great. The model easily deals with road imperfections and they’re barely noticeable inside the cabin. While we wouldn’t go as far as calling it cloud-like, the ride quality is impressive and not even Michigan’s pothole covered roads can upset it.

Handling is also good and you never get the feeling that you’re driving a massive SUV. Body roll is muted and you can take corners with surprising speed. You still have to be conscious about the model’s size, but the Yukon drives smaller than it is and handles well for something so large.

Speaking of dynamics, the Yukon AT4 and Denali can be outfitted with a new Active Response 4WD system. It consists of an automatic two-speed transfer case, Traction Select, StabiliTrak and an electronic limited slip differential. The latter allows for infinitely variable torque distribution and promises better wet weather traction as well as cornering performance. In 4WD LO, the eLSD also helps to prevent wheelslip in off-road conditions. 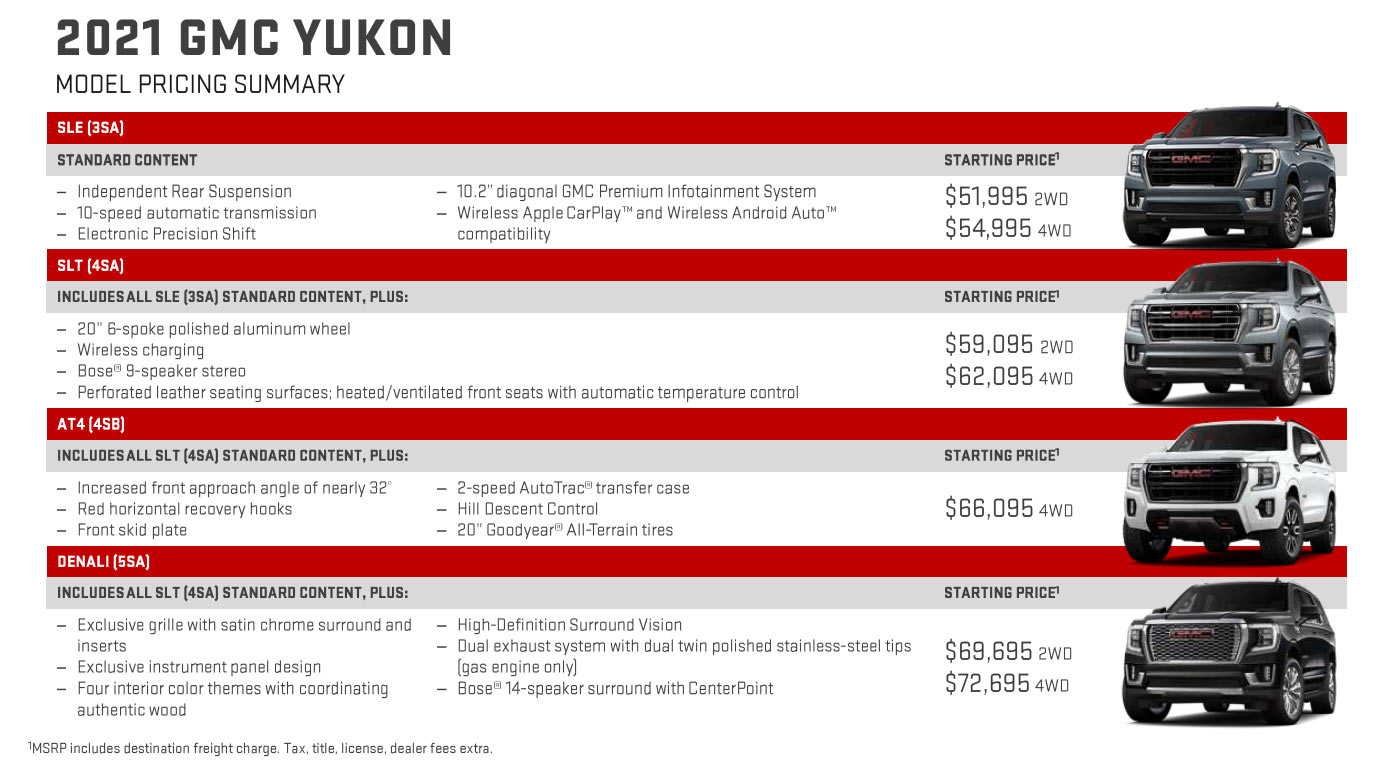 The 2021 GMC Yukon SLE starts at $51,995 and features LED lighting units, power front seats and a 10.2-inch infotainment system. Moving up to the $59,095 SLT rewards buyers with perforated leather seats, a wireless smartphone charger and a 9-speaker Bose audio system.

The Yukon AT4 is available exclusively with four-wheel drive and begins at $66,095. Lastly, the range-topping Denali starts at $69,695 and includes a luxurious interior as well as a standard 6.2-liter V8 engine.

As for our AT4 tester, it stickered at $75,155 thanks to the $8,145 Premium Plus Package and a handful of individual options. That’s the price of a moderately equipped Denali, so customers might have a tough time deciding between the two.  Of course, the elephant in the room is the 2021 Cadillac Escalade and it starts at $77,490.

Rugged Luxury With A Charming Personality 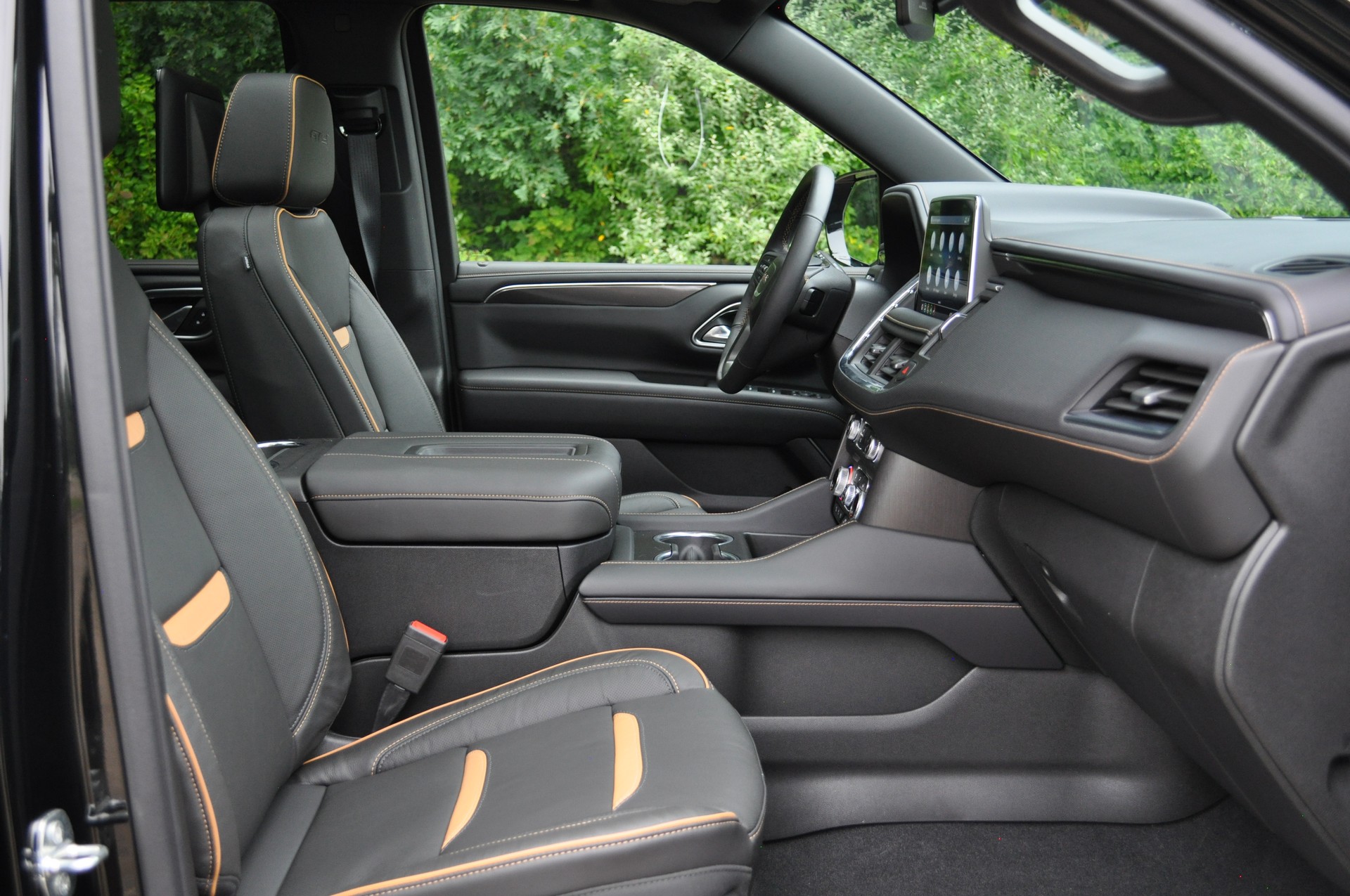 The 2021 Yukon improves on its predecessor as it’s larger, more comfortable and more spacious. On top of that, the SUV gains a significantly improved interior with modern technology and a more upscale design.

While many customers will continue to flock to the Denali, it’s nice to see GMC mixing things up and adding the new AT4 trim. The rugged styling will undoubtedly win over some fans, but it’s a shame the trim can’t be equipped with adaptive cruise control.

If that’s a deal breaker, you can upgrade to the Denali and get its exclusive interior which is more luxurious than ever before. The model also boasts a more powerful V8 engine than the AT4, so that might be the way to go.