A little over a decade ago, mainstream sedans were about as exciting as a wet rag. They were bland, largely unremarkable and seemly designed for people in the witness protection program.

That changed in 2009, when Hyundai introduced the sixth-generation Sonata which would gone on to billed as a four-door coupe for the masses. The model was an instant hit and nearly doubled Sonata sales in the United States.

Not to be outdone, Kia introduced the third-generation Optima a year later. Designed by Audi alum Peter Schreyer, the Optima traded the Sonata’s flowing lines for a sportier and more muscular appearance. It was a massive hit as well as Optima sales skyrocketed from 37,527 units in 2009 to 152,399 in 2012.

The segment has changed considerably since then as consumers have flocked to crossovers and Ford has discontinued the Fusion. Kia is changing with the times as the Optima has been replaced by the all-new K5.

A Return To Bold Design 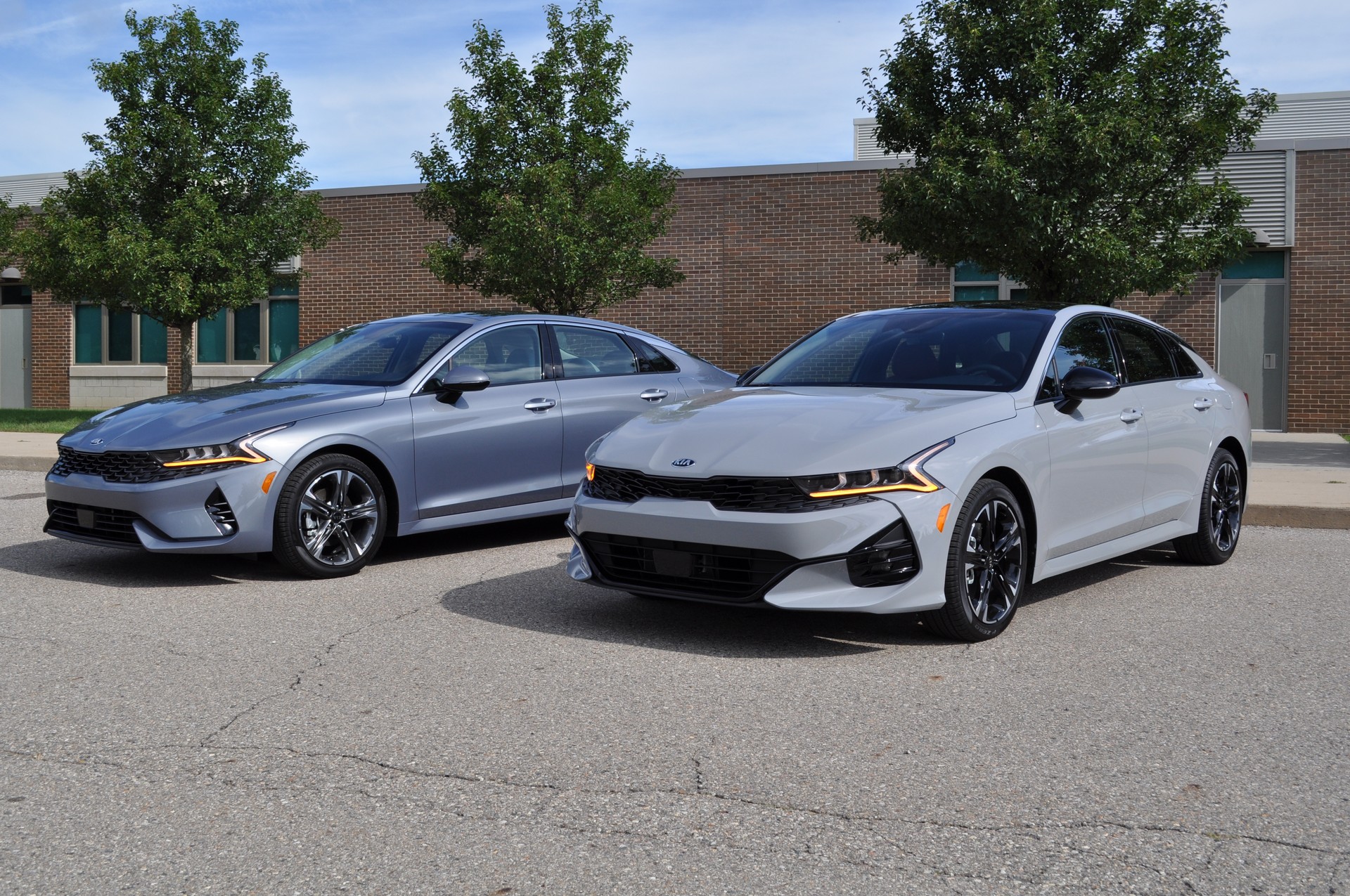 While the third-generation Optima featured a standout design, the fourth-generation model lost its edginess. While it still looked good, the car wasn’t as exciting or revolutionary as its predecessor.

The K5 doesn’t suffer the same fate as it looks rather stunning. The model echoes the Audi A5 Sportback and appears far more upscale than the price tag suggests.

In fact, the K5 got a response I’m not used to seeing in cars costing significantly more. A couple of strangers said they wanted one, while I caught another person apparently filming the car. 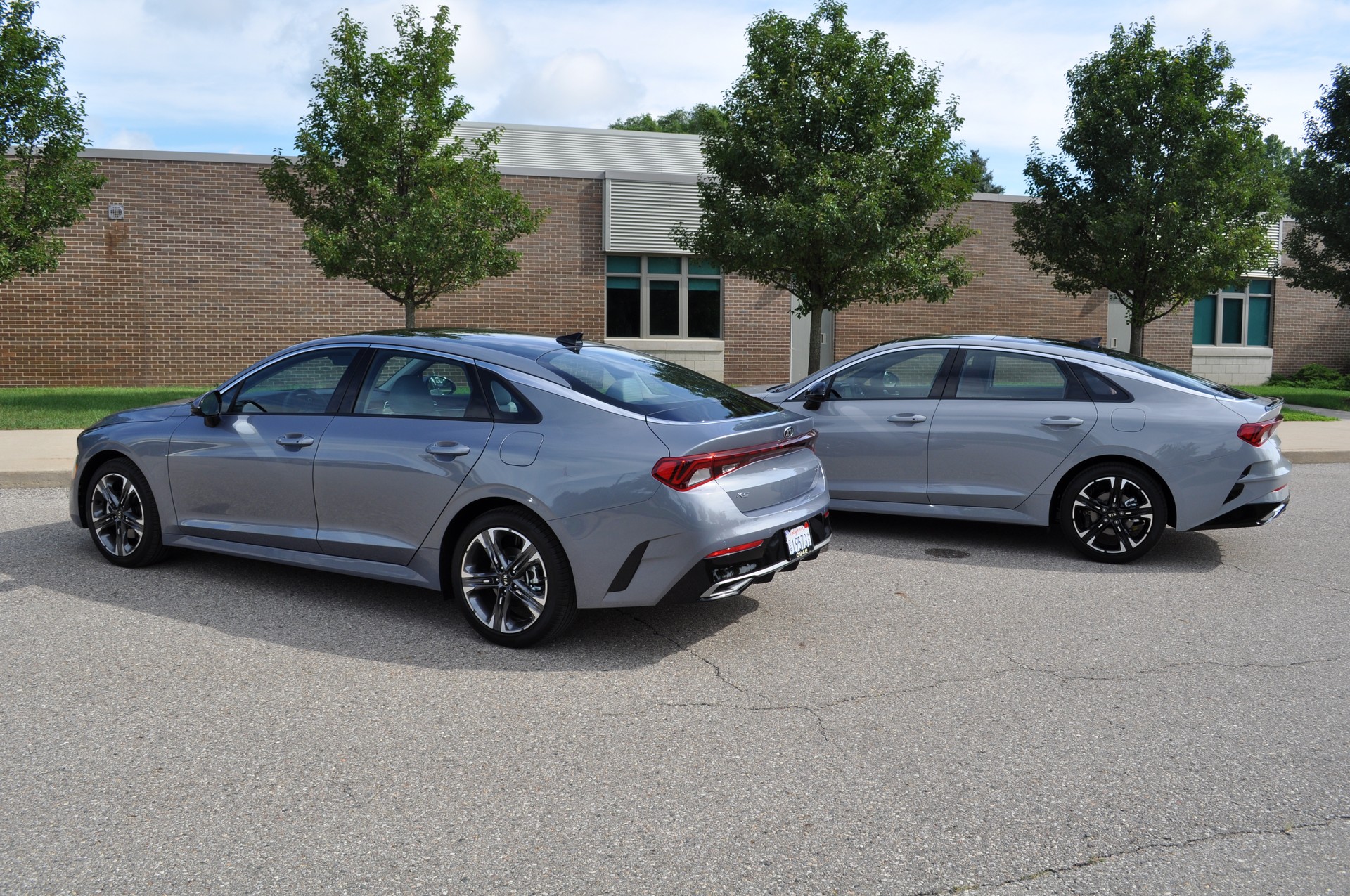 That’s some pretty decent kit for a base model, but we tested the K5 GT-Line and the luxurious K5 EX. The latter looks similar to the LX, but it features gloss black window surrounds, a panoramic sunroof and larger 18-inch alloy wheels.

The GT-Line kicks things up a notch as it’s distinguished by sportier bumpers and a unique grille. The model also has gloss black mirrors, a gloss black rear spoiler and 18-inch wheels with gloss black accents.

The GT-Line also boasts LED taillights that are connected by a thin strip with LED “dashes.” They’re optional on the EX and are included in the $3,400 Premium package which also adds a host of other equipment. 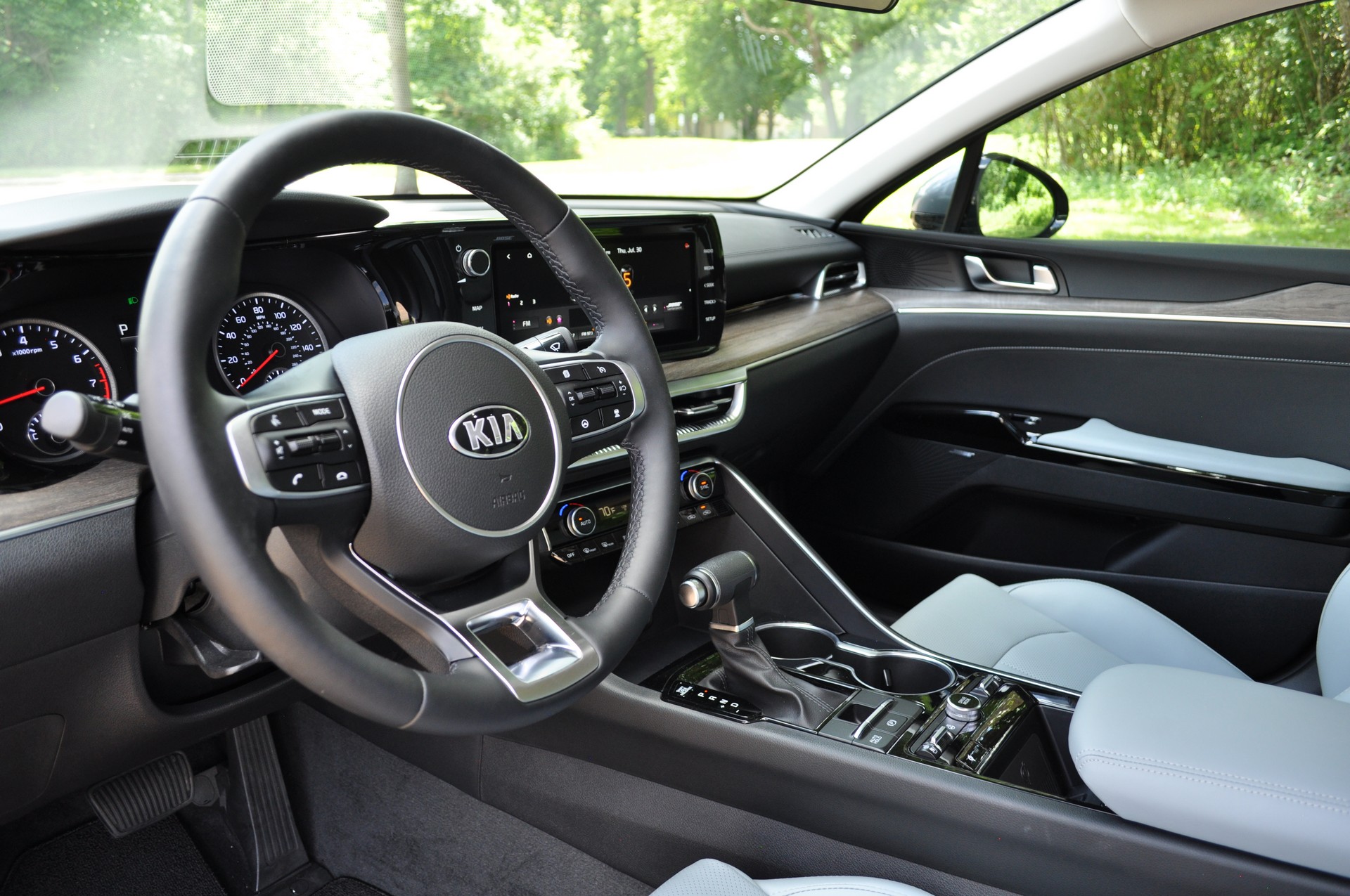 The upscale styling continues in the cabin, especially in the K5 EX. It features comfortable leatherette seats with standard heating and ventilation.

The upscale design continues with the infotainment system, which flows out of the instrument cluster in a BMW-like fashion. An 8-inch display is standard, but our EX tester was equipped with the optional 10.25-inch display that has voice recognition technology, GPS navigation and Android Auto / Apple CarPlay compatibility. 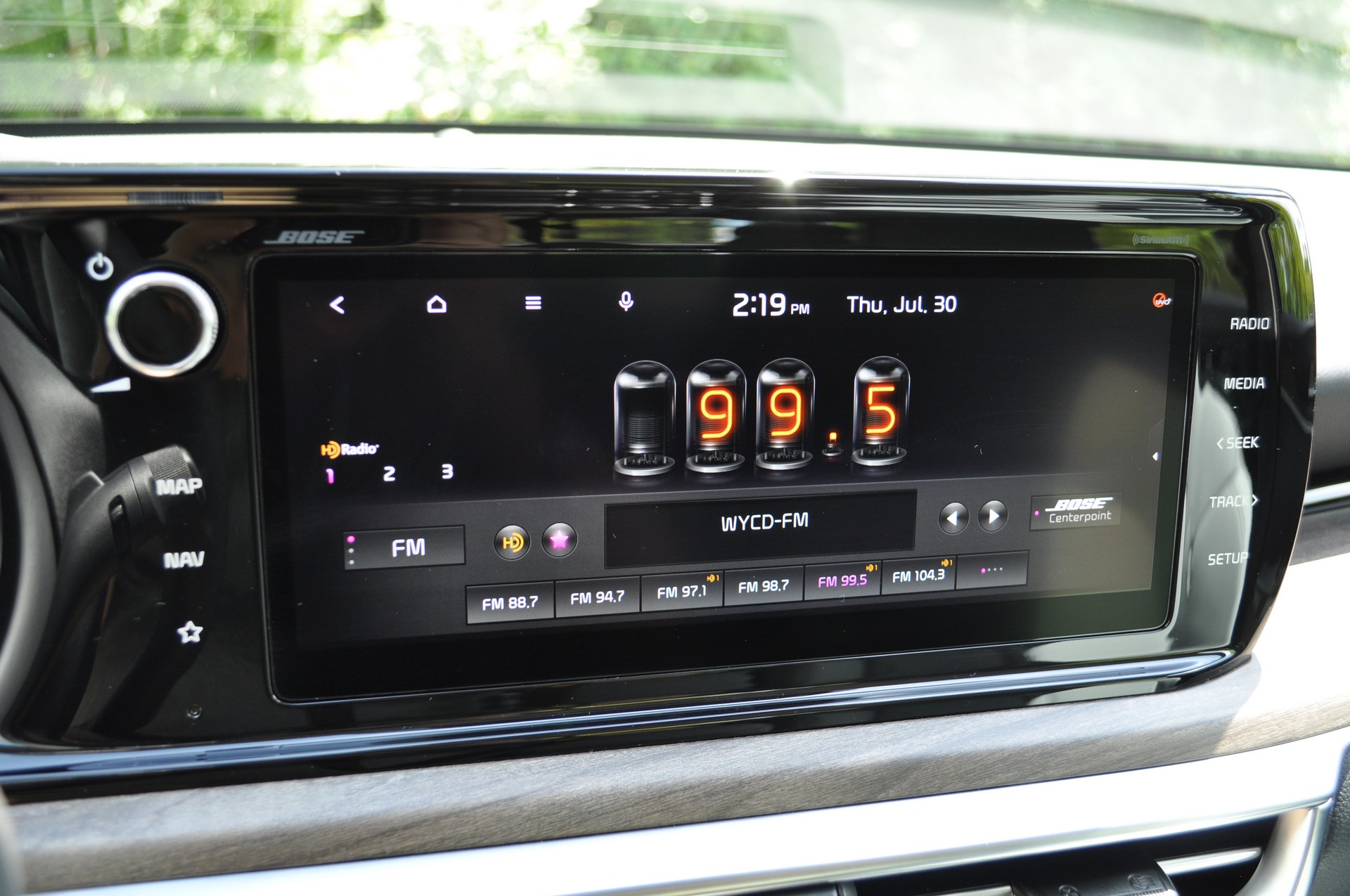 Another cool tech feature is the wireless smartphone charger. While most vehicles have a tray at the base of the center stack, the K5 has a nearly vertical charger that is mounted in front of the armrest. You simply drop your phone into the slot and it starts charging.

This layout is neat for a couple of reasons as your phone is hidden out of sight, while also remaining within easy reach. Furthermore, the vehicle will remind you to take your phone if you happen to forget it. 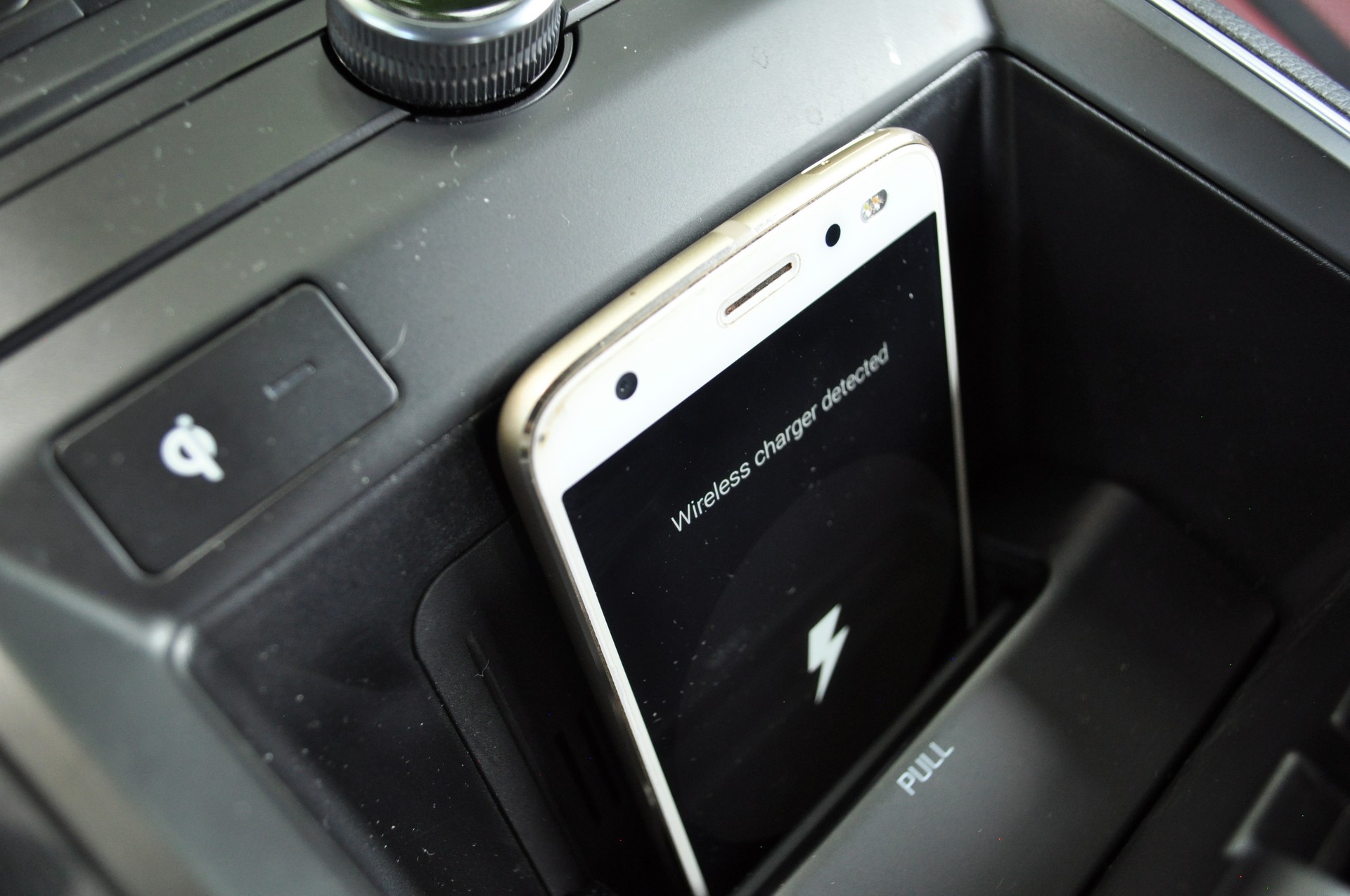 Speaking of phones, the K5 EX has four USB charging ports and one USB data port. Two of the charging ports are located on the rear of the center console, just below the air vents.

The K5 GT-Line goes in a different direction as its interior embraces sportiness. As a result, it has a flat-bottomed steering wheel and “GT-Line” branded seats. Cloth and leatherette upholstery is standard, but customers can opt for the red leatherette seats seen on our tester.

Elsewhere, there’s painted trim which carries over from lesser models. The trim is a bit lackluster and it would have been nice if Kia went for some fancier metallic trim for the sport-inspired sedan. 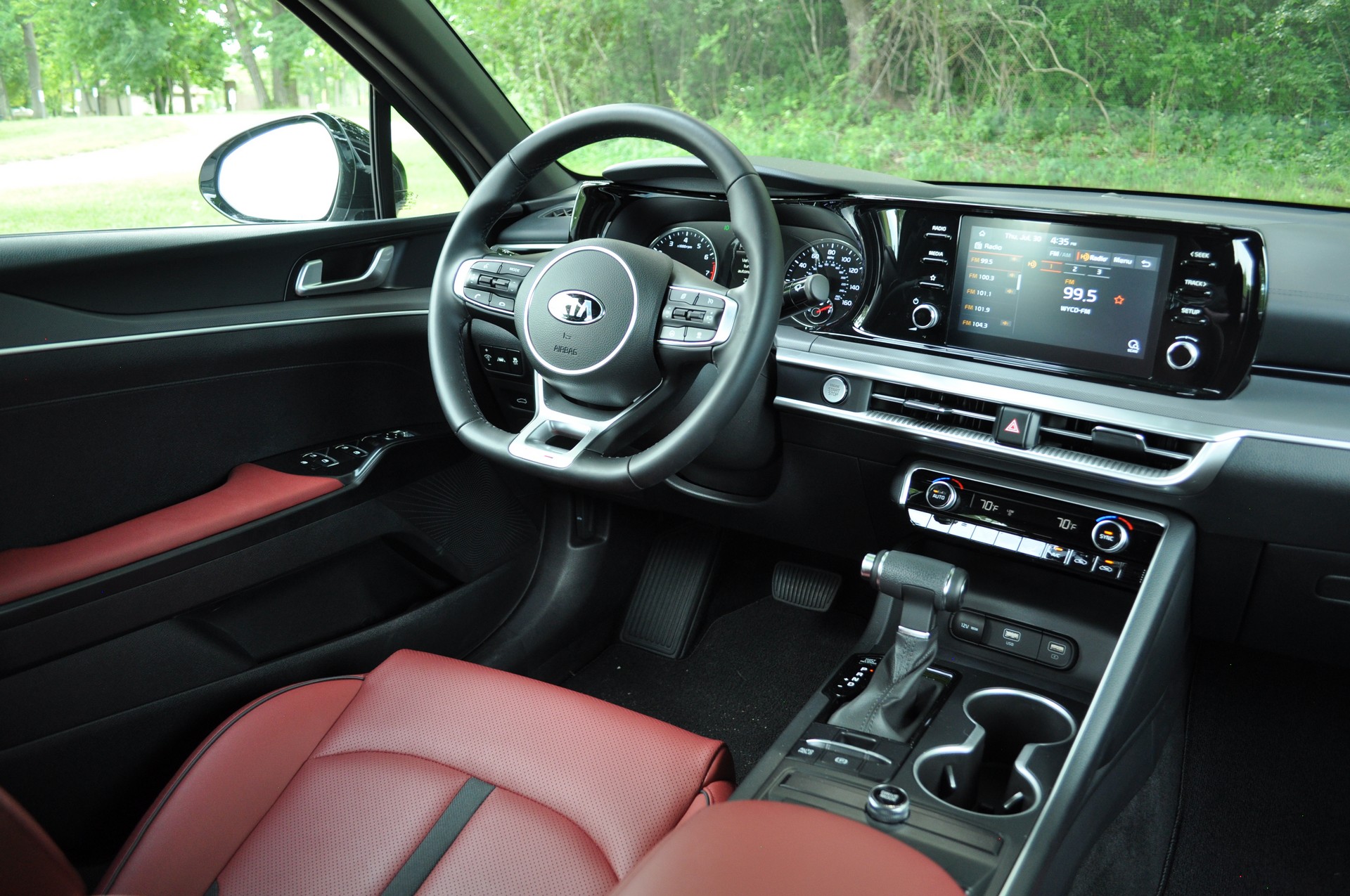 That isn’t the only disappointment as GT-Line eschews metal components for silver painted plastic. The 8-inch infotainment system is also pretty basic, but it’s easy to use and has dedicated buttons that work every time.

On the bright side, all K5s have a relatively spacious interior. There’s a generous 46.1 inches (1171 mm) of front seat legroom and 35.2 inches (894 mm) of rear legroom. The latter figure doesn’t sound very impressive, but this 6’2” reviewer can easily sit in the rear seat while still having plenty of room of up front.

However, the car’s lower roofline and optional panoramic sunroof limit headroom. Up front, it’s not too bad as there’s 38.4 inches (975 mm) of room. Back seat passengers aren’t as lucky as there’s an inch (25 mm) less of space.

Speaking of room, the trunk holds 16 cubic feet (453 liters) of luggage. That’s nearly smack dab in the middle of the Accord and Camry as the latter holds 15.1 cubic feet (428 liters), while the former accommodates 16.7 cubic feet (473 liters). If you need more space, you’ll be happy to know that every trim except the base LX has split-folding rear seats.

Two Turbo Engines With Up To 290 HP 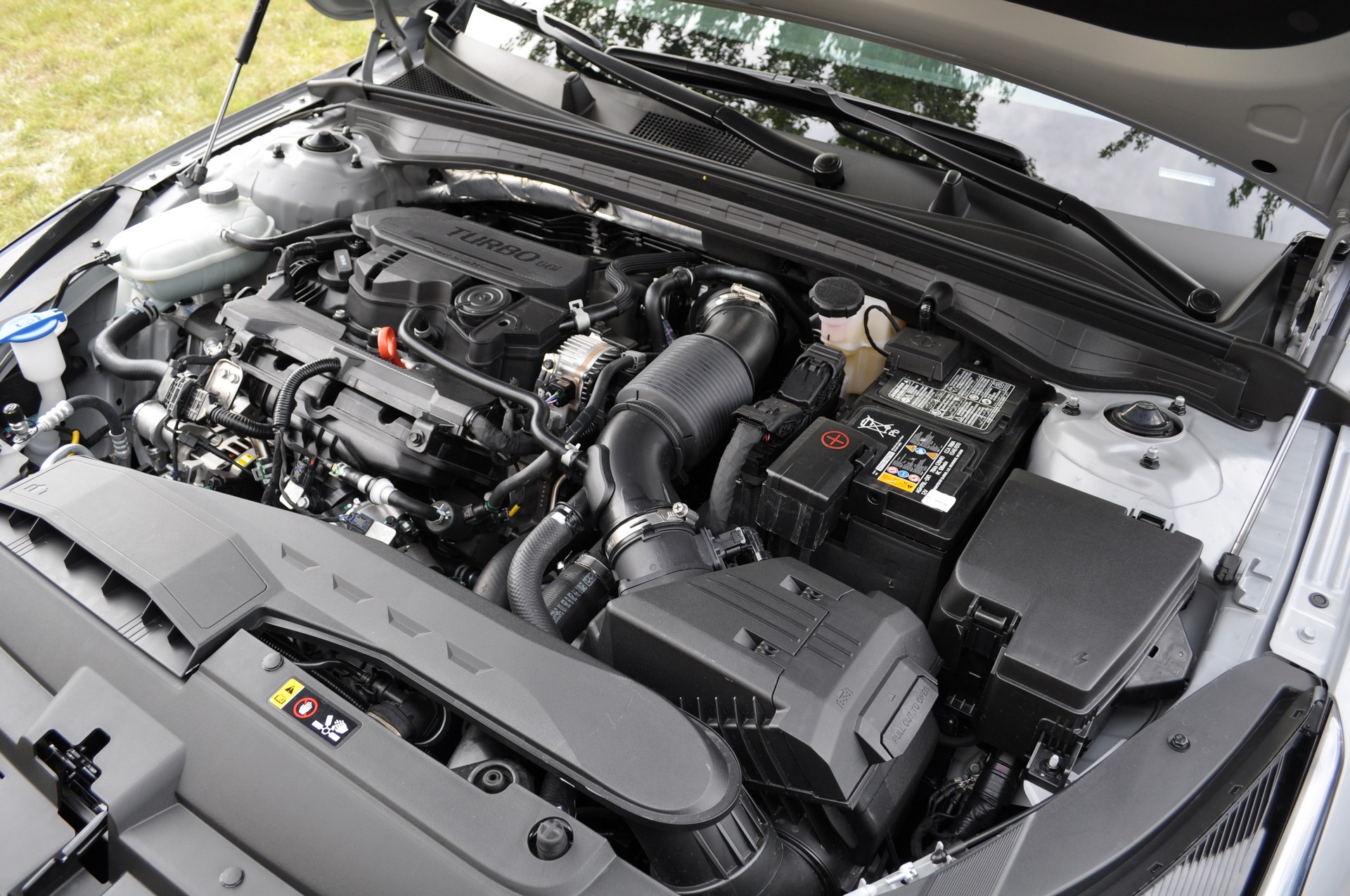 Both of our testers were equipped with a turbocharged 1.6-liter four-cylinder engine that produces 180 hp (134 kW / 183 PS) and 195 lb-ft (264 Nm) of torque. It’s paired to an eight-speed automatic transmission which sends power to the front wheels.

However, the K5 will be offered with an optional all-wheel drive system later this year. It will be available on the LXS and GT-Line trims, and promises to provide all-weather driving capability as well as enhanced performance.

Customers seeking more power can wait until the K5 GT arrives this fall. Their patience will be rewarded with a turbocharged 2.5-liter four-cylinder engine that develops 290 hp (216 kW / 294 PS) and 311 lb-ft (421 Nm) of torque. It will be paired an eight-speed dual-clutch transmission which enables the model to run from 0-60 mph (0-96 km/h) in 5.8 seconds. That’s pretty remarkable for a family sedan but, unfortunately, it won’t be offered with all-wheel drive. 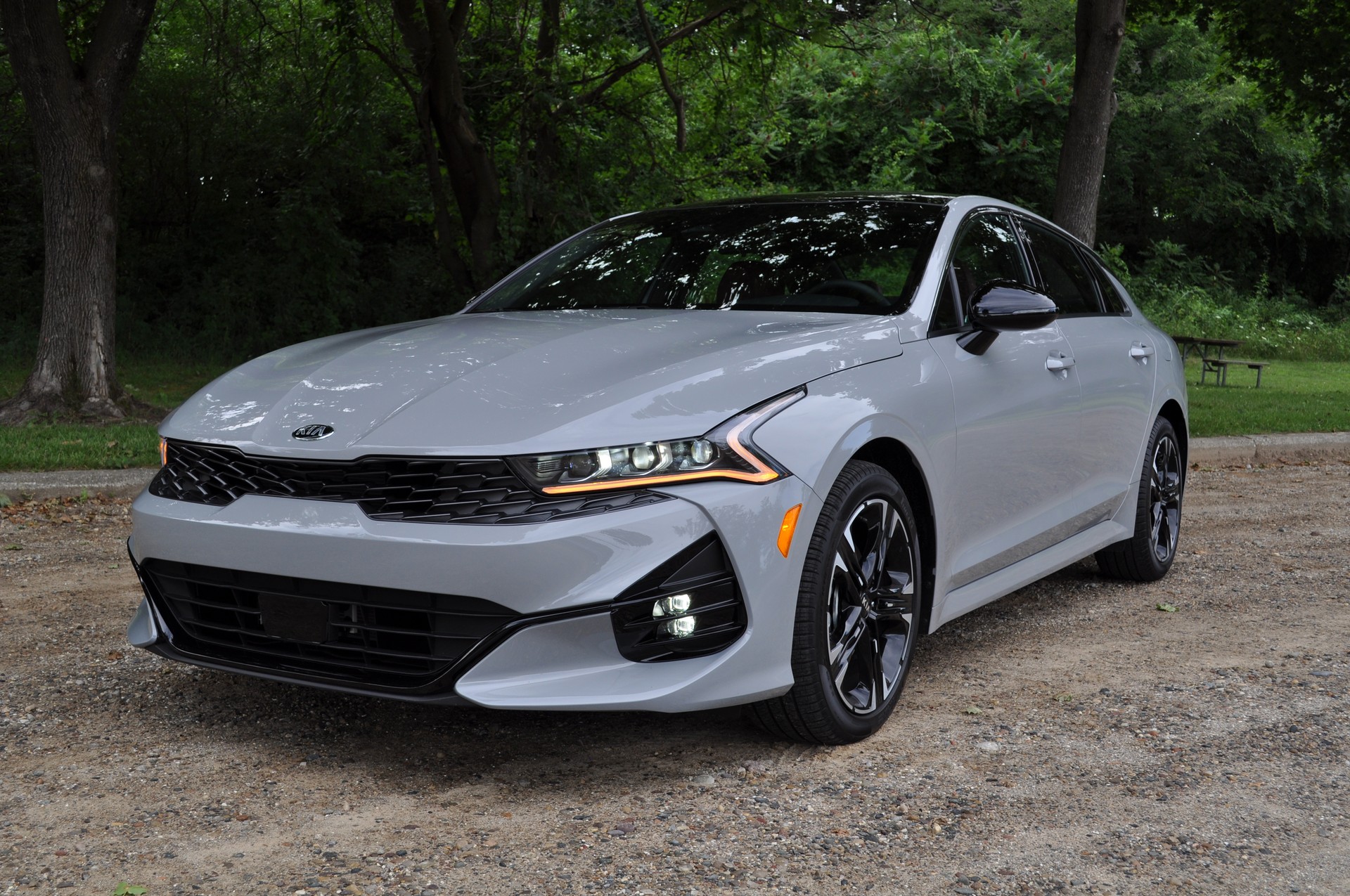 The engine is backed up by an eight-speed automatic transmission which delivers fast and smooth shifts. While there is a manual mode, Kia avoided the temptation to give the GT-Line steering wheel mounted paddle shifters.

The K5 rides on the all-new N3 platform and features a suspension geometry that has been “optimized for sporty handling, responsiveness and stability.” That isn’t just marketing fluff as the model does feel somewhat sporty.

The K5 has a relatively firm ride, but it’s comfortable on good road. On less than perfect surfaces, you’ll feel the imperfections but they’re not jarring. Overall, it’s sportier than the Camry but the Accord probably provides probably a better mix of comfort and sportiness.

The steering is responsive, but it feels too light in the normal driving mode. Sport mode improves things considerably and there’s a custom mode with separate powertrain and steering adjustments. 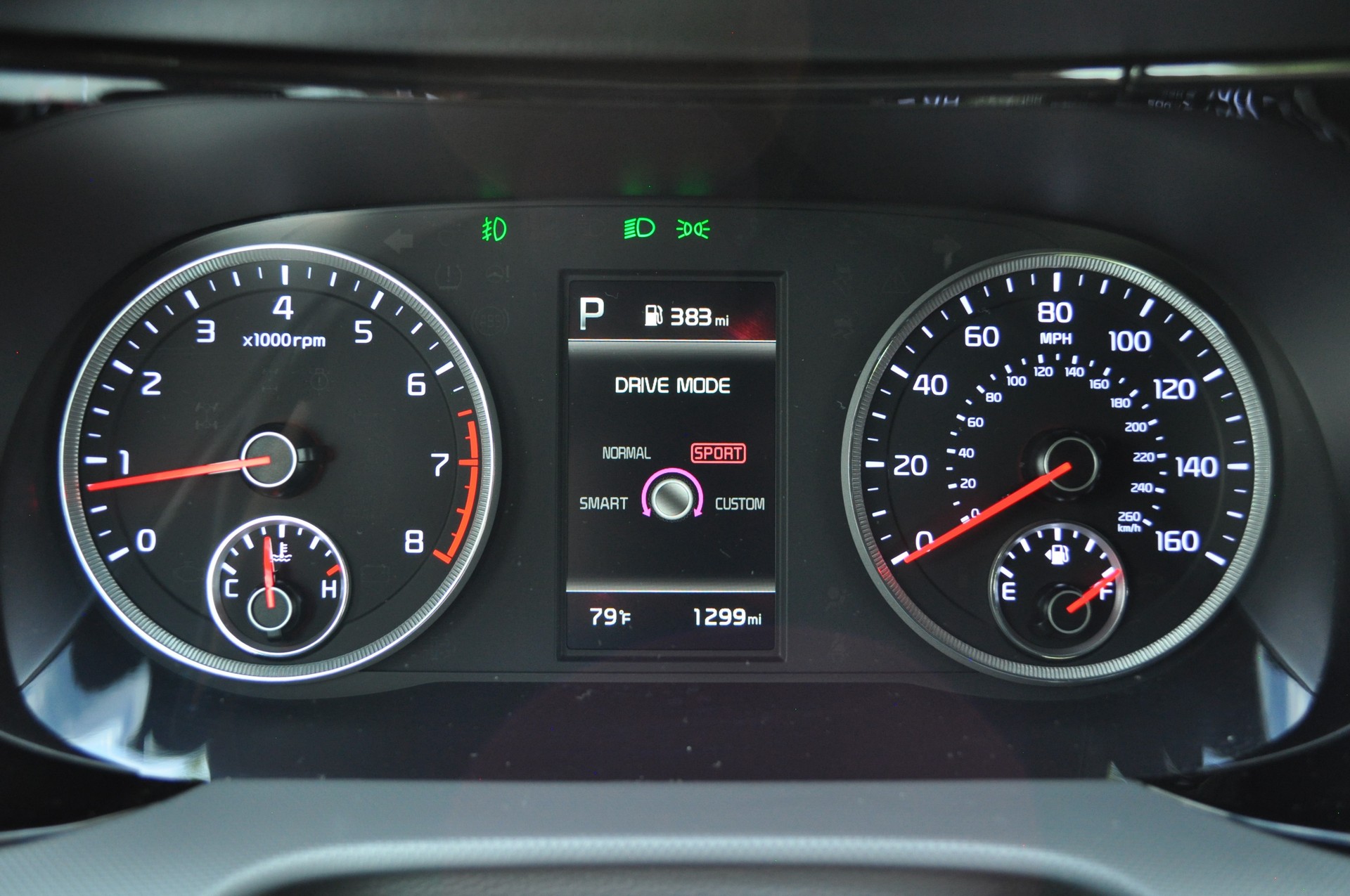 The car is a willing partner on curvy back roads, but the experience isn’t overly rewarding. On the bright side, the K5 feels stable and secure.

We didn’t give the brakes that much of a workout, but K5 comes standard with 12 inch (305 mm) ventilated front discs and 11.2 inch (284 mm) solid rear discs. They felt pretty responsive and plenty powerful. Of course, the upcoming K5 GT is more dynamic so engineers equipped it with a beefier braking system that features larger discs which measure 13.6 inches (345 mm) front and 12.8 inches (325 mm) rear.

Our GT-Line tester starts at $25,390 and will cost $29,090 when equipped with the optional all-wheel drive system. The luxury-oriented EX is front-wheel drive only, but it slots in between the two as pricing starts at $27,990. That’s pretty reasonable, but our tester was loaded and featured a sticker that exceeded $30,000.

That brings us to the range-topping K5 GT. When it arrives in November, the model will cost $30,490 and likely tempt a number of shoppers to upgrade.

The K5 Is Nice, But It Faces Stiff Competition 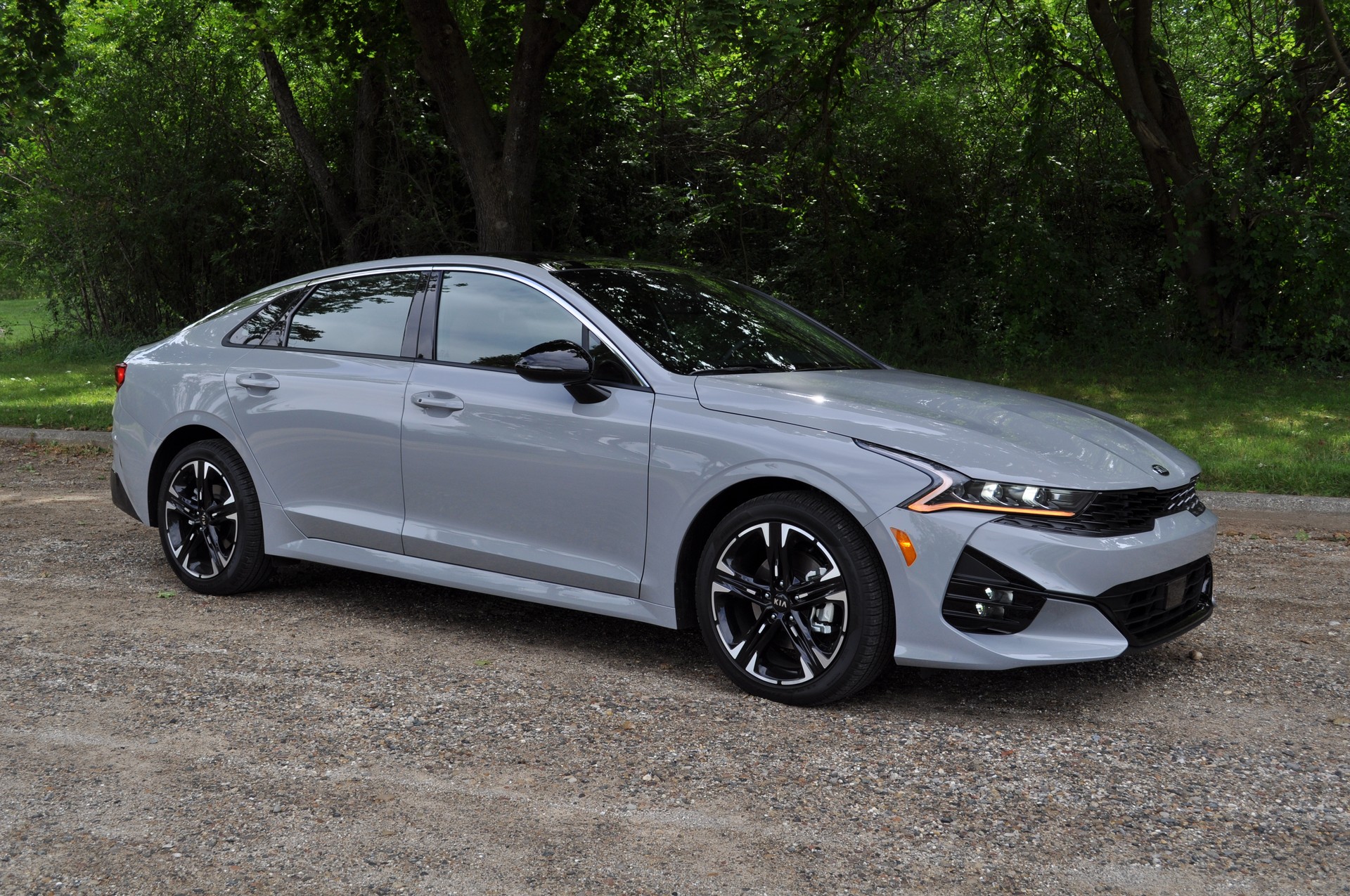 The Optima helped to put Kia on the map and the K5 appears to be worthy successor as it’s stylish, affordable and well-equipped. The model also improves on its predecessor as it features a newly available all-wheel drive system and a sporty GT variant.

However, the K5 finds itself in a competitive segment which is largely dominated by the Accord and Camry. Of course, there are also others including the Chevrolet Malibu, Mazda6, Nissan Altima, Hyundai Sonata and Volkswagen Passat.

That being said, the K5 builds on the success of the Optima while offering improvements of its own. As a result, it’s definitely worth your consideration.